Marty’s Place is an independent living environment located on a ¾ acre property in Key West was the first housing facility purchased by AIDS Help. When acquired in the late 1980’s through a $795,000 mortgaged-financed plan supported by private contributions and pledges. At one dinner party attended by 50 local people, hosted by the Marquesa Restaurant, and sponsored by Broadway’s Jerry Herman, over $600,000 was raised to finance the purchase Marty’s Place and other capital expansion. At the time, the property had eight cottages buildings – seven one-bedroom units and one two bedroom unit. In the mid-1990’s locally raised dollars were also used to cover the construction costs of a two-unit structure duplex at the Marty’s Place housing complex, increasing the number of buildings on site to ten and increasing the number of one bedroom units to nine. Many of the buildings were renovated in 2001 with a $50,000 State Housing Initiatives Partnership program (SHIP) grant through the Monroe County Housing Authority. The Florida Department of Community Affairs (DCA) provided $60,000 in Weatherization funding in 2004 to upgrade HVAC systems and insulate six buildings/units at the housing compound. In 2006, AIDS Help, utilizing $269,000 in local contributions and $120,000 in SHIP funding through the Key West Housing Authority, was able to construct a second Tri-Plex at Marty’s Place, which has three one-bedroom units that are elevated above the flood plain. Another unit on site completely destroyed during Hurricane Wilma (October 2005) was elevated and completely restored with funding from Volunteer Florida, Inc. and the Home Depot Corporation at a cost of $74,000. In 2008, AHI began rehabilitation of six units that were seriously damaged and flooded during Hurricane Wilma in October 2005. The $555,000 project included lifting all six units approximately three feet to mitigate future flooding. Funds for the rehabilitation and mitigation came from the Monroe County SHIP office. 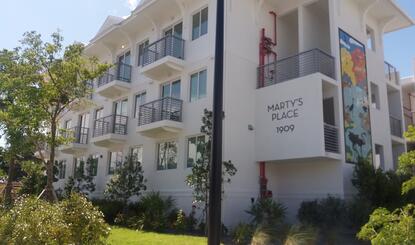