Source of Income Discrimination in Housing

Section 8 Housing Choice Voucher holders across the country find it difficult finding a suitable rental home. Many of these failed rental searches stem from landlords who have blanket policies against accepting Section 8 voucher holders. In most areas, landlords are permitted under the law to openly discriminate against voucher holders. A simple search in your local Craigslist for rent listings will typically yield many ads containing the words “No Section 8”.

In many areas of the country, this problem has become so bad that many new voucher recipients can’t find a landlord willing to accept their voucher and they actually lose their voucher before they ever can benefit from it, many times after waiting for years on a waiting list.

In Oakland, CA, only 115 of 609 voucher recipients (18.9%) in the area found a unit with their voucher in 2015. According to the Chattanooga Housing Authority (CHA) in Tennessee, about two-thirds of the housing authority’s new voucher recipients lose their voucher before funding a unit. As a result, the CHA now hosts landlord fairs that allow voucher holders to have face-to-face conversations with several landlords who are looking for tenants.

A few states, counties and cities in recent years have tried to address this problem by enacting Source of Income (SOI) discrimination laws. These laws typically include one’s source of income as a protected class under equal housing and other anti-discrimination ordinances. 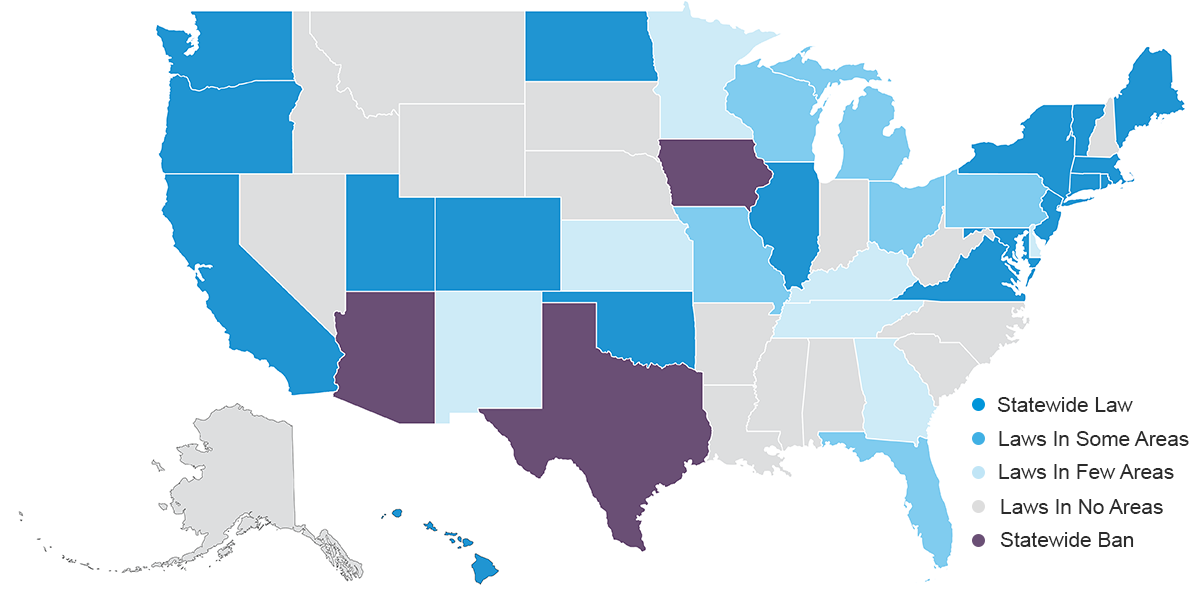 As of March 20th, 2020, there are 84 jurisdictions1 that prohibit discrimination against Section 8 Housing Choice Voucher holders. These jurisdictions are:

Where Is It Prohibited to Enact SOI Anti-Discrimination Laws?

As lawmakers across the country continue to enact legislation affecting Source of Income Discrimination this page will be updated. For more information on this topic read our article at https://affordablehousingonline.com/blog/law-aims-to-end-section-8-source-of-income-discrimination/

1. Most of this information was obtained by a report from the Poverty & Race Research Action Council (PRPAC), which was last updated in May 2016. We are in process of independently verifying the information provided in this report.

2. The statute clearly prohibits discrimination against voucher holders. However, landlords can refuse to rent if the government program 1.) requires an inspection; 2.) the improvements needed to pass the inspection cost more than $1,500, and: 3.) the landlord has not received funds from the landlord mitigation program to make the improvements.

3. According to PRPAC, "the Corporate Counsel refuses to enforce Section 8 cases."

4. The law states that “this section shall only apply with respect to a Section 8 certificate if the monthly rent on such residential unit is within the allowable rent as established by the Department of Housing and Urban Development.”

5. The law states that “this section shall only apply with respect to a Section 8 certificate if the monthly rent on such residential unit is within the allowable rent as established by the Department of Housing and Urban Development.”

6. The law states that “this section shall only apply with respect to a Section 8 certificate if the monthly rent on such residential unit is within the allowable rent as established by the Department of Housing and Urban Development.”